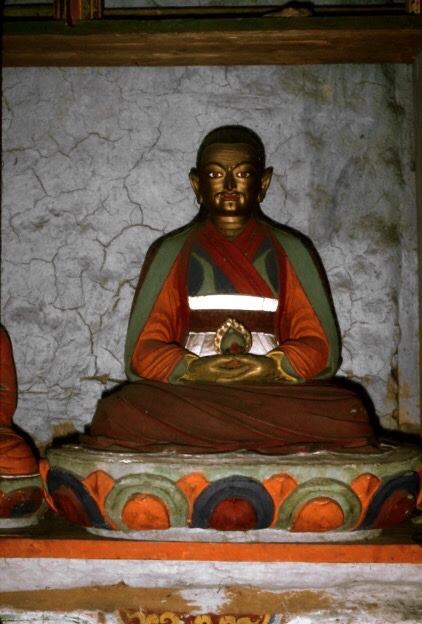 In the early months of 1164, a great Buddhist master of the time in Tibet, Zhang Yudrakpa Tsondru Drakpa (1123-1193) suddenly asked his attendant to arrange a display of offering in his shrine room one midnight, the reason was that he saw a great Indian Sidha Kṛiṣnācharya, known as Nagpo Chodpa (nag po spyod pa) in Tibetan, enter the womb of Nyö Dragpa Pel’s wife. The child was born on the eighth day of the twelfth month of wood male Monkey year in the same year.

Having born with various signs wearing a light of confidence on his face, his father named him Zejid Pel (gzi brjid dpal). As he grew up, his formal education to study, reflect and practice began at the age of five at Chushul Trig (chu shul skrig) also known as Thuma Goen (thu ma dgon) where he received the ordination vows of three special days: the eighth, fifteenth and thirtieth days of the months from Gashey Purangpa.

He studied the grammar and literature, philosophical studies, the logic and epistemology, and the five works of Maitreya under the teachers Gashey Dhenbagpa, Gashey Yer-nyen Lopen Sherub Jungney and Rongka Jobom. As his father is the bearer of his one of the great grand fathers Nyö Lotsawa Jungpo Yonten Dragpa’s (967-1072) special lineage of Guhyasamāja teachings, he received complete instructions of practice of this teaching from his father.

As a young teenager, he was interested in following his great grand father’s footsteps to become a translator. He planned to make a journey to India to train himself into a translator. In the meantime as he travelled around Tibet in preparation, he was introduced to his destined master the Drikung Jigton Sumgoen, who was much regarded as the second Nagarjuna in Tibet and the founder of Drikung Kaguye to whom his devotion and faith grew instantly upon meeting him and became his dedicated pupils to become one of the three greatest disciples of the teacher.

He received his complete novice vows from Gashey Dorji Zhonu assisted by Balti Josey and senior ordained monks in the ordination ritual at Thagma Lhakhang as advised by lord Drikung Jigten Sumgoen. At Drikung he received all the teachings and instructions of Kaguye tradition including the six practices of Mahamudra followed by strict practice in seclusion for seven years. At a later time, he also went into a strict secluded meditation for another three years at Chelkha as well. 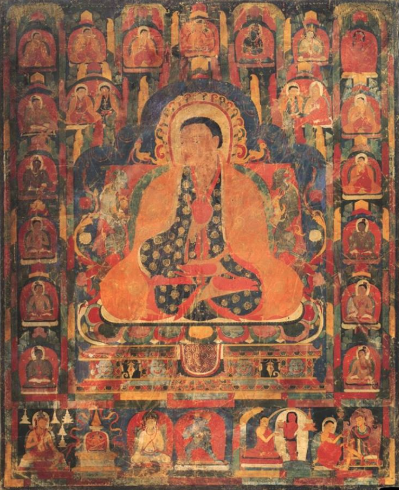 At the age of 26, he went to Tsari with two other fellow disciples known as Gar Dampa Choeding and Palchen Choeyey as directed by their master. The three are most popularly known as the Nyö, Gar, Choe Sum (the trio of Nyö, Gar and Choe) of Drikung. On the way to Tsari, they also met with Drogoen Tsangpa Garey who was following his own master’s directives and the four together discovered and introduced many sacred places of Tsari opening it up for pilgrims.

Like rest of the members in the journey, for Nyö Lhanangpa, he saw visionary appearances of his gurus and tutelary deities such as the mandala of Guhyasamāja at Tsari Dongpokhar, sixty-two deities of Chakrasamvara at Pura Teng, Buddha and Bodhisattvas on the top of Tsari, and Dakinis and Siddhas in the valley. As the objects of manifested appearances, he brought some parts of bamboos and plants from Tsari, which sits among the sacred relics of Sumtrhang today.

During the time when he moved  around from place to place since the age of 30, Zejid Pel spent some time at mount Kailash, Lake Mapham, Labchi and in Lhomon Khazhi which was mostly in Paro Chelkha during which he established Chelkha Dzong in 1194. At Paro Chelkha, he spent in total of 11 years as he kept moving from place to place. In Chelkha Dzong 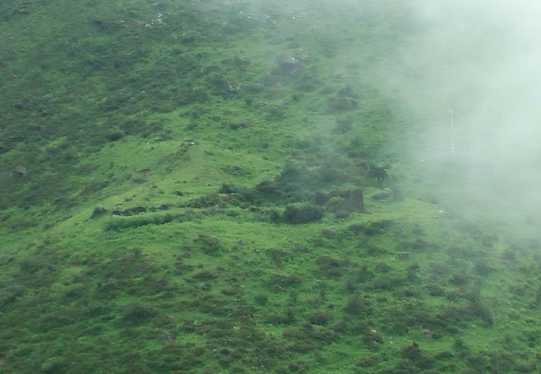 , the highest assembly gathered at a point was over seven thousand students and hermits who lived in the monastic community to study and practice. His establishment of Chelkha introduced Buddhist monasticism and educational institution for the first time in the territory of today’s Bhutan after which establishment of several monastic schools followed across Bhutan. The ruins of the monastic structure and hermit houses of Chelkha remain visible even today in the high mountains of Nubri Valley in northern Paro  bordering of Tibet.

At lake Mapham as he sat cross-legged in lotus posture without sinking, the serpents of the lake offered him a stupa crafted by non-human spirits, the top made of sliver, the middle part made of natural copper and lower part of the slate. This was later offered as an inner relic to the statue of Guru rinpoche in Kurje on request of the then Trongsa Penlop, Gongsar Ugyen Wangchuck when he commissioned a temple construction at Kurje.

Having born into a rich family, Nyö Lhanangpa was also known for his great generosity and ability to donate for the monastic community. He was known for his several huge offerings he made to Lord Jigten Sumgoen and lavish feast offering to the masses of the monastic assembly in Drikung Thil. At a later time, after his father’s death, he also offered most of the family possessions to Drikung Dhensa Thil including the skull cup which once belonged to Naropa.

From Chelkha his followers travelled further down into the valley and built several monasteries including the Dho Ngoen Dzong, where Dechen Phodrang monastic school stands in today’s Thimphu. His Drikung tradition of school was later known as Lhapa Kaguye and remained dominant in the west until the Drukpa School began to flourish in early 1220s. As his school known as the Lhapa Kaguye was forced to diminish, Nyö Lhanangpa made arrangements to have his son Dechog who was already a great Vajra Kyilaya practitioner under a great Sidha known as Ngagchang Nyeljor Tsemo to begin a lineage establishment in Mon Bumthang. 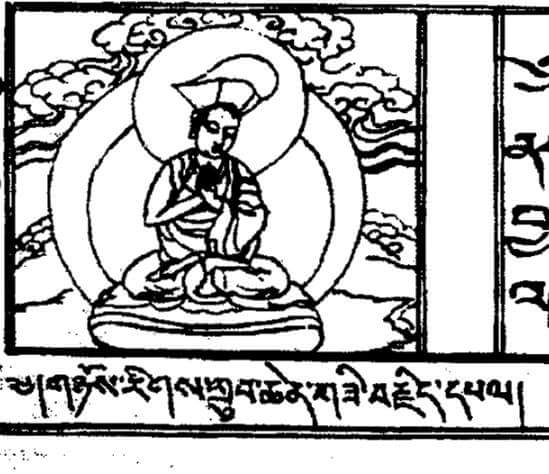 In Tibet, at a later part of his life, on the mountain of Ngyenchen Thanglha’s neck known as Lhanang, he established his main monastic center where his disciples and students gathered and lived studying and practicing around him. Over 2800 students assembled among which are, six hundred strict hermits with supplies provided from his treasury and five hundred others practicing with their own supplies, together at one point making the highest number of spiritual hermits in the community. From there he was more known as the Nyö Gyelwa Lhanangpa deriving from the place Lhanang where his monastery was built.  Among his names, he was also known as Gashey Nyö, Chojey Rinchen Pel and Nyö Drupchen Zijed Pel. Sangay Rinchen was his other given name, which was probably the dharma or the novice name received on ordination. 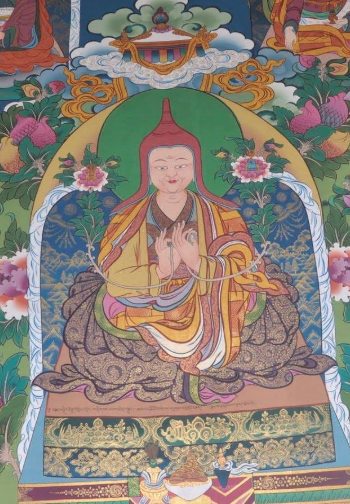 After having made all the efforts and achieved the wishes of his teacher the lord Jigten Sumgoen to benefit sentient beings through all means, he left his temporal form and died at the age of 61 in 1224 on the eighth day of the eighth month in wood Monkey year exhibiting the reality of impermanence, yet with miracles for those left behind to see the qualities in the path taught by Buddha and his Bodhisattva sons.

Picture Curtesy:
1. The picture of the ruins of Chelkha Dzong is a generously helped by a good friend Chogyel Rinzin.
2. The Old mural painting of Nyö Lhanangpa, is from the Treasury of Lives: https://treasuryoflives.org/biographies/view/Nyo-Gyelwa-Lhanangpa-Sanggye-Rinchen/2789