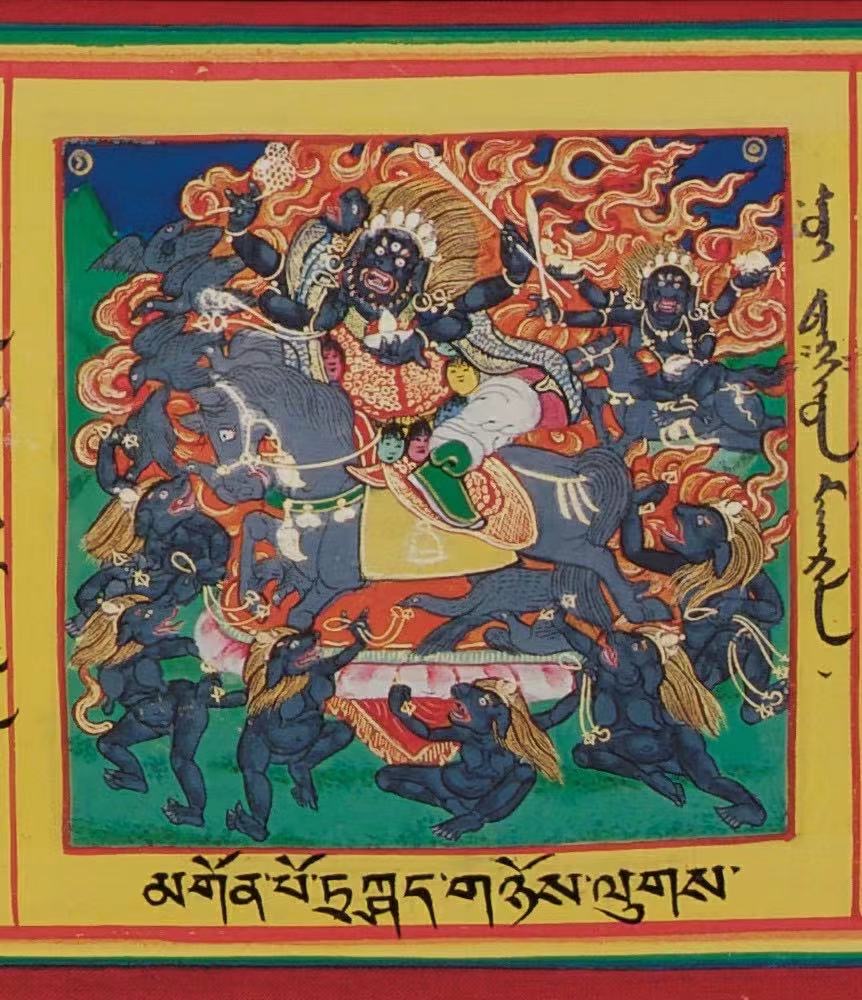 The empowerment and transmission of Traksad gnyos lugs ma, which started from the great Nyö Lotsawa Yonten Dragpa(973-1113) is very alive in Jonang today. The unbroken transmission of it is lived through Nyö Gyalwa Lhanangpa and Jetsen Taranatha in Jonang until today. Thanks to a Chinese friend who offered the lead to the living line of Traksad Mahākāla of gnyos tradition and a picture of it.

These four cycles known as gnyos kyi rgyud bzhi were popular in Tibet at one point of time. The empowerments and transmission of  these cycles of teachings were not only passed down from fathers to sons of gnyos lineage holders, but it was also offered to rgya ston Arya de ba and his son rdor je bla ma of rgya clan by Yonten Dragpa. It is mentioned in some sources that as a gratitude for receiving the teachings and empowerment, the rgya father and son were said to have offered Mon kha bzhi, present day Paro in Bhutan, part of ’gos yul stod gsum of Tibet then to yontan grags pa. ’gos yul stod gsum at that point of time was owned by Gos and rgya clan. Gos were the secular leaders and rgya were the spiritual leaders of that region. Hypothetically, that might be another reason why lhanang pa, grandson of Yonten Dragpa came to gchal kha in Paro, Bhutan. Gyelwa Lhanangpa was the first religious figure who established the first monastic school in Bhutan at gchal kha in Paro.  The religious school at gchal kha was known as lha pa bka’ brgyud, which disappeared slowly after ’brug pa’s arrival in Bhutan.

While today, most of these transmissions seem to have lost, it is amazing to discover from some literature and informal conversations with acquaintances that remnants of these teachings and transmissions are still intact and so alive in Jonang tradition. It was learned that Jonang Kunga Drolchog was identified as the incarnation of lhanang  pa and has received transmission of some of the gnyos tradition teachings. Therefore, the transmissions of part of the gnyos teachings are still within Jonang tradition. lhanang  pa, hence, is also considered one of the important figures in Jonang school of Tibetan Buddhism.

Contributed by Sonam Nyenda. Sonam is a former lecturer at CLCS, Taktse. He is currently pursuing PhD in religious study at the university of Virginia, US. He is also the core founding member of the Nyo Foundation of Bhutan.