Sumtrhang Samdrup Choedzong is the full name of the monastic establishment, located in Sumthrang village under Ura Gewog (county) of Bumthang district. It is one of the earliest establishments in Bhutan and only most oldest monastery associated to Drikung school for it was founded by Nyö Gyelwa Lhanangpa, although his son seems to have fulfilled the actual establishment. As one of the oldest religious centres, it houses some of the country’s most sacred relics and has been a vibrant centre of religious and cultural life.

The general wide spread and orally well established narrative is that Nyö Gyelwa Lhanangpa also refereed to as Nyö Josey Nyeljor or Ngagchang Nyeljor Tsemo a principle disciples of Drikung Jigten Sumgoen the founder of Drikung Kagyue school founded Sumtrhang. However, according to existing written sources his son Nyoton Trulzhig Chojee to whom he has bestowed the cycle of Vajra Kilaya Guhaya Tantara seems to have established the Sumtrhang monastery in 1220s fulfilled to start the first Vajrakilaya centre in Bhutan. Whether it is established by Nyo Lhanangpa himself or his son, Sumtrhang then became the  hereditary lineage of Nyö in Bhutan becoming an earliest Vajra Kyila practicing centre in Bhutan. Nyö Lhanangpa is also the first to started monastic school in Bhutan through his establishment of Chelkha Dzong in CE 1194. Later the growth of Chelkha branches in the western part of Bhutan came to be known as Lhapa Kaguye. It become prominent in western Bhutan until it lost its dominance to Drukpa Kagyue school which arrived Bhutan in the 1220s.

The monastery is build on a symbolic landscape with a cliff resembling like a stack of texts at the north, a conch shell resembling land at the south, a rocky terrain in the shape of swastika at the east and a milky brook at the west. The temple was built on a ground where a four sided stone pillar stands symbolizing the pillar of four activities. This stone pillar is housed in the ground floor of the temple today.

The cliff at its north known as Sumtrhang Drag is the area of its retreat centre on and around which is dotted with ruins of hermit houses of the monastery’s retreat centre of its incumbent lineage holders, accomplished siblings and their followers. The cliff which stand divided into two blocks are known as the Sharling the eastern block and Nubling the western block. It was named similar to how Nyö Lhanangpa established Sharling and Nubling on Ngyenchen Thanglha in Drikung.

The monastery’s local and incumbent’s personal guardian deity is the Sumtrhang Draktsen known as the Lhatsen Dorji Draduel.  He rides on a dark black horse with main retinue of the kings of four directions leading other local non-human spirits. Many communities around the branch monastic temples founded by the incumbents of Sumtrhang across the kingdom. Communities such as the Shingnyer in Bumthang, Zhongmey and Wangzhing in Lhuentse and several communities in Zhemgang district’s Kheng region also worship Draktsen as their local guardian deity maintaining the cultural history of association to Sumtrhang.

Sumtrhang monastery’s degeneration has probably began since the 1770s, during the reign of Druk Desi Zhidar who was said to have restricted the practice of schools other than Drukpa Kaguye for sotime. Until then Sumtrhang has had a good relation with central monastic body as several sons from the family of the Chöje has also joined the central monk body and one of them has even achieved the highest ranks in the monastic system as the first Tsenyid Lopen during Desi Tenzin Rabgay’s time while another by name Ngawang has gone to Nepal as the Gangri Lama. 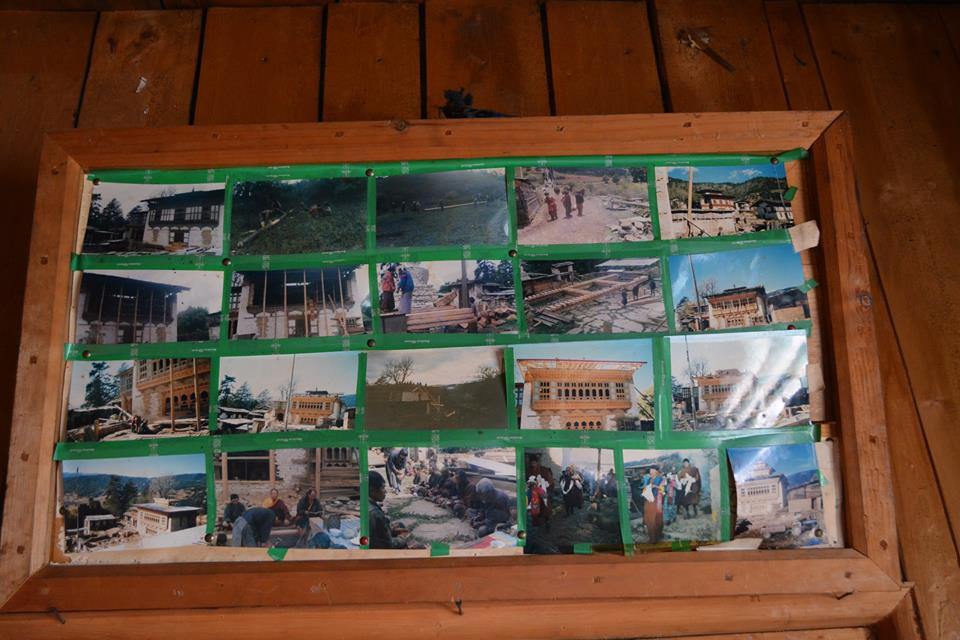 Today, the monastic establishment is undergoing a process of gradual restoration since 2000 initiated by current Sumtrhang’s seat holder Ven. Chöje Lama Gyatsho who is the 28th Sumtrhang Chöje from among the 48th generation of the Nyö clan in Bhutan. Since 2000, main temple was renovated. Under the revival and restoration initiative, seven young and bright students were sent to Drikung Jangchubling in Dheradhun Inda, and a small nunnery has been instituted since 2016.

A framed process of temple renovation in pictures.

Located at 3,100 metres above the sea level, the small village locally known as Sombrang and its people the Sombrangpa sits at the foot of a huge wall of Sumtrhang cliff at its north with rest of the valley down below at its south dotted with several other villages in the valley among which is the famous Ura village of Bumthang.

The name of the village was a later mispronunciation of Sumtrhang. In the past there was only the Sumtrhang Samdrup Choedzong Monastery and its monastic community without a village such as the one we have today. As the community continued to grow with time, it came to be known as Sombrang and the monastic temple, as Sombrang Lhakhang.

The monastic community in the early time was divided into five, the residence of the founder was called the Nagtsang, and rest of the community was divided into four known as the Konyeray the temple caretaker, Gartsangba the blacksmith, Zargangba the water keeper and Taraiba the staple keeper. 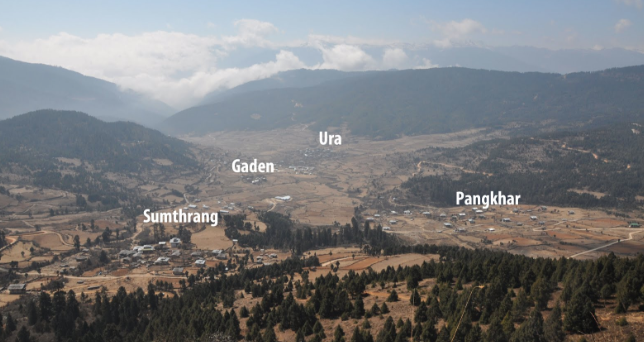 By the later part of the twentieth century, the community grew into a small village as the members of the households increased and therefore, today the households in Sombrang has grown into eighteen, all of them an extension of these four major units of the past Sumtrhang Samdrup Choedzong monastic community.

Traditionally the community members were active participants in the upkeep of the monastic cultures and were also involved in the initial restoration process when in 2000 restoration of the main temple begun on receiving government support. A seed money for the restoration was received from His Majesty the 4th king administered by the district administration  and the locals were approved of their labour contribution to be at their home.  However since labour contribution system discontinued with new reforms not long after the beginning of the restoration works. Locals faced by the modern challenges were not able to continue with the traditional up keeping of the monastic activities as even the registered members of the monastery began to decline as the family responsibilities grew with time.

Today the Sumtrhang Choeje strive to up keep this monastic institution by working on the revival of its spiritual, cultural and educational traditions to its past glory through the support of both local and international well wishers and supporters.