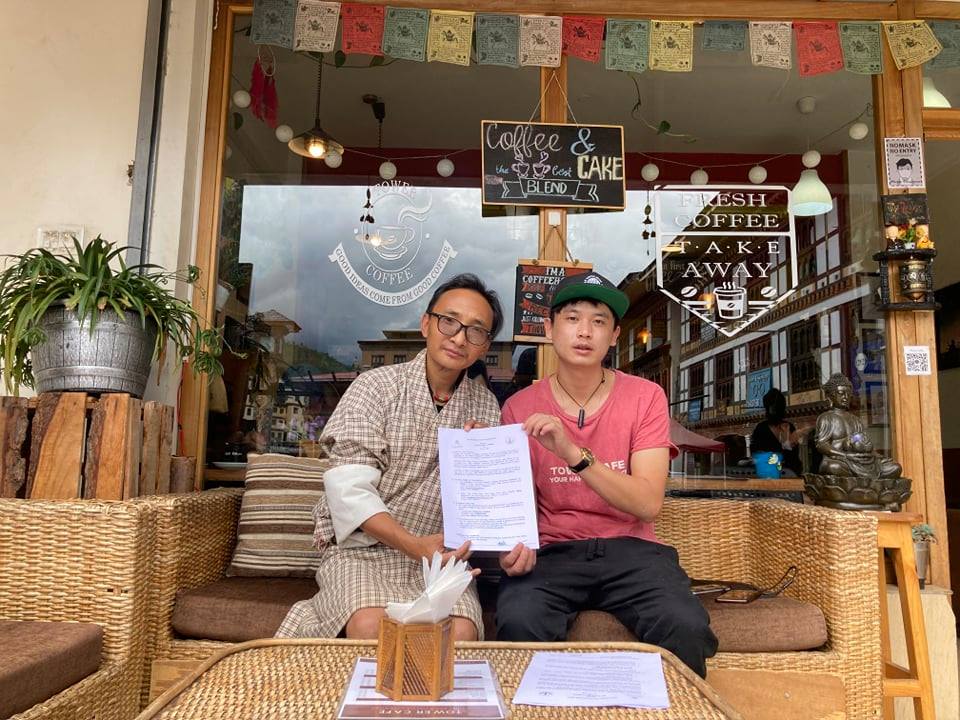 Today in a simple marking of the successful journey of Tower Café. The Nyo Foundation of Bhutan signed a MoU with the proprietor and CEO of Tower Café, Mr. Sonam Thinley, a budding youth entrepreneur aimed at promoting the ideology of “responsible business for self and others,” among potential youths in a near future.

The MoU marked the launching of the fundraising for Nyo Youth Initiative, which began with the establishment of the Tower Café in 2017. Under the MoU the Tower Café will contribute a standard minimum amount every month beginning October 2021 towards this initiative to the foundation until the activities under the initiative is launched when the minimum required fund has been raised.

The beginning of Nyo Youth Initiative began in 2017 when one of our founding members sought an answer to his struggling financial matters from his past business engagements resulting into the accumulation of debts. The last business he established is the Tower Café in 2017 which out of genuine consideration in practice of giving as a merit to gain. He decided to offer the café he established on a simple “pay only principal investment initiative” to a young, passionate, determined and a skilled man at his early 20’s in Sonam Thinley.

Sonam did not have any operation fund nor did he have anyone who can help him financially beyond what he received under the deal at that time. But his passion and determination with skills required for café brought him this far, now an independent budding entrepreneur. A deal he is offered was to repay and clear the principal investment within 7 years by paying a minimum of Ngultrum three thousand a month but he cleared the principal investment amount within four years’ time as we celebrated his success. He not only is growing in his entrepreneurial journey at his nascent age but genuinely believes in our ideology of “responsible business for self and others,” to which he puts personal efforts in his own small ways to promote within his unit of entrepreneurial network.

This is put into greater effort through the MoU the Tower Café signed with our foundation on September 9, 2021 to realise the Nyo Youth Initiative. When the minimum fund for the initiative is realised, the foundation will be implementing similar initiative to empower potential youths through “Pay only Principal Investment,” to self-employ and build their dreams.